The mission of Jesus is summed up in the sentence, “The kingdom of God has come near to you”. (Luke 10.8-9)

1. The twofold mission of Jesus involves:
a. A Message – Jesus announces that God’s kingdom has come near.
b. A Ministry – He heals the sick and drives out demons.

2. Five practices demonstrate the imminence or arrival of the kingdom of God:
a. Announcing good news to the poor;
b. Healing the sick and driving out demons;
c. Raising the dead;
d. Eating and drinking with sinners;
e. Gathering a preview community to live out the life of the Kingdom.

3. The resurrection of Jesus and the outpouring of the Holy Spirit at Pentecost signal the beginning (or inauguration) of the Age to Come.

4. So, what’s the good news? The future has come into the present. The age to come has dawned. God’s generous rule has broken powerfully into this present evil age and now everyone has access to its benefits through simple confidence in Jesus.

B. Clash of Kingdoms

2. The first reference to the kingdom of God in Scripture comes at the end of Miriam’s song in Exodus 15:8 “The LORD will reign for ever and ever.”
a. This statement comes after the Exodus, when Yahweh (God) delivered his people from slavery in Egypt.
b. In Exodus 12:12, God announces his intention to bring judgment on Egypt: “On that same night I will pass through Egypt and strike down every firstborn — both men and animals — and I will bring judgment on all the gods of Egypt. I am the LORD.”

3. A collision of power occurs between Yahweh, the God of Israel and all the gods of Egypt.
a. The battle occurred in the ten plagues.
b. The first nine plagues demonstrate Yahweh’s superiority over every Egyptian god.
c. The last plague judges Pharaoh for refusing to acknowledge Yahweh’s Lordship.

4. The pattern for the battle is set in the first act. Aaron’s rod becomes a snake. Pharaoh’s magicians do the same thing. Aaron’s snake eats the other snakes! Lesson # 1: The power behind Moses and Aaron is greater than the power behind Egypt.

C. How Jesus understood his mission

1. Jesus understood his mission as a divine invasion. He is invading Satan’s domain and undoing Satan’s handiwork. Casting out demons and healing the sick point to the defeat of Satan. Jesus is robbing the strong man’s house. He is defeating Satan on his own turf.
Mark 3.20-27 Jesus and Beelzebub
a. The teachers of the law accuse Jesus of using the power of Beelzebub, the prince of demons, to cast out demons.
c. In answering this charge, Jesus gives us a glimpse into his understanding of his mission: Satan is the strong man. Jesus is the stronger man.
d. The stronger man binds up the strong man and then robs his house.

2. Jesus sees the works of the kingdom as robbing the strong man’s house: healing the sick, forgiving sin, driving out demons, raising the dead, eating the messianic feast with sinners, inviting people to live under God’s generous rule all point to the defeat of Satan.

3. Luke 10.17-18 The seventy-two returned with joy and said, “Lord, even the demons submit to us in your name.’ He replied, “I saw Satan fall like lightning from heaven. I have given you authority to trample on snakes and scorpions and overcome all the power of the enemy; nothing will harm you. However, do not rejoice that the spirits submit to you, but rejoice that your names are written in heaven’.

Luke writes ‘how God anointed Jesus of Nazareth with the Holy Spirit and with power and he went about doing good and healing all who were under the power of the devil, for God was with him’ Acts 10.38

Jesus demonstrates the presence (or nearness) of the kingdom by overturning the works of the ruler of this age.

If I drive out demons by the Spirit of God, then the kingdom of God has come upon you. Matthew 12.28

If I drive out demons by the finger of God, then the kingdom of God has come upon you. Luke 11.14

6. However, the story of Jesus destroying the devil’s work poses a serious worldview problem for Western Christians.
a. A clash of kingdoms occurs in our minds as the kingdom of God confronts the powers of Western scientific rationalism.
b. If we are to join Jesus in his mission, the kingdom of God must invade and inhabit our minds and defeat the powers of Western rationalism.
c. We need a worldview transplant – a paradigm shift.

D. The Real World and the Spiritual Realm

1. Modernity is a materialist worldview – Only the material world is real. There is no place for God, angels, devils, heaven and hell.

2.Western people live with the assumption that the spiritual realm, if it exists at all, is somewhere out there, beyond the stars.
a. As scientists have discovered more and more of the universe, heaven has become more and more remote.
b. We assume that there is a gap between the real world and the spiritual world.

3. Dr Paul Hiebert argues that Western Christians have a blind spot in our worldview.
a. While we believe in heaven and hell, God and eternity, we unconsciously confine them in our thinking to an ‘upper tier’ of religion, far from the physical world and from our daily existence.
b. We live in a ‘lower tier’ of science, the empirical world of our senses – those things that we see and experience in the natural, material order. This is the real world.

4. The upper and lower tiers are both real, but do not interact.
a. There is an ‘excluded middle’ in the way Western people think, an inability to see how science and religion interact.
b. Therefore, angels, demons and the Holy Spirit’s intervention in divine healing, signs and wonders, etc, are excluded from everyday life.

5. Non-Western worldviews make room for all kinds of supernatural interventions in everyday life, so the idea that God can heal is easily accepted.

6. Western Christians, on the other hand, make little room for what the Scriptures teach as normal – the regular activity of both God and Satan in human life. 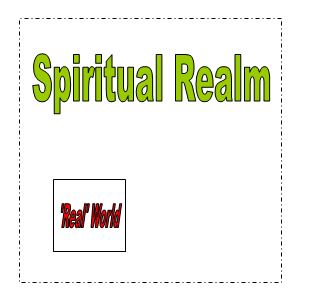 2. If you have a Western education, you have been indoctrinated into Western scientific rationalism.
a. It is a stronghold in your mind that continually throws up roadblocks to operating effectively in the spiritual realm.
b. Even now, your mind is analyzing the things I am saying, coming up with all the reasons why I’m wrong. What is that?
c. Rational skepticism, the main tool of scientific investigation, makes it very difficult to receive the things of the Kingdom.
d. You cannot apprehend the things of the kingdom using the tools of rational skepticism.

3. What should I do?
a. Surrender your autonomy and bring your life under the generous rule of God. Put down the tools for rational skepticism, and pick up the tools of faith.

1. Where is heaven?
Jesus proclaimed “Repent, for the kingdom of the heavens is at hand”.
a. His listeners understood what he meant. We don’t. We have a different worldview.
b. God lives in the heavens. We think of heaven as some distant, faraway place.
c. This is not how Jewish people thought.

2. Jewish cosmology had three heavens.
a. The first heaven is the air around us – the sky, where the birds fly.
b. The second heaven is what we call space, where the sun, moon and stars do their thing (also inhabited by angels and demons).
c. The third heaven (which Paul visited for a little while, 2 Cor. 12) is God’s throne-room.

3. When God acts, he does so in the world. He acts out of the air around us. This is the first heaven. God is not on some distant throne playing dice. He is right here with us.

G. The Origins of Sickness and Healing

1. Where does sickness come from?
a. An Indian or African person, who doesn’t have a Western education, believes that sickness and disease are connected to spirits, curses and magic.
b. We know better. Disease is caused by genetic disorders, chemical imbalances and pathogens such as viruses, bacteria and prions.
c. We see no connection between sickness and spiritual things.

2. Finish these sentences:
Sickness comes from … (Satan, the Fall, This present evil age)

3. Many Christians are confused about this. A distorted view of the sovereignty of God makes them believe that sickness comes from God.
a. God never sends sickness.
b. Sickness is a consequence of the fall and belongs to this present evil age.
c. “When we say that God sends sickness or asks us to endure it, we are creating for many people an image of God they must eventually reject. What human mother or father would choose cancer for their daughter in order to tame her pride?… Those preachers and chaplains who try to comfort the sick by telling them to accept their illness as a blessing sent from God are giving an immediate consolation, but at what an ultimate cost!…In a sense, we unwittingly treat God as something like a pagan deity, placated by human sacrifice.”

4. Healing comes from God.
a. The healing of our body and our spirit belongs to the Age to Come.
b. How do we know that God wants to heal the sick?
c. Answer: Jesus – he healed everyone who came to him for healing.
d. Jesus authorized us to bring healing as a sign that God’s generous rule has now broken into this present evil age.
e. Heal the sick who are there and say, ‘The kingdom of God has come near to you’.

We write about all things church, theology, and the kingdom.

The Coming of the Kingdom

This post explores the eschatological framework of the New Testament. A. Introduction Mark 1.14-15 ‘Now after John was…